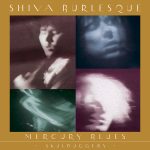 Shiva Burlesque‘s Mercury Blues has been reissued by Independent Project Records along with the Skulduggery collection, which includes previously-unreleased material from the seminal LA band led by Grant Lee-Phillips and Jeffrey Clark. In 2004, No Depression wrote a review of a previous reissue of Mercury Blues, which, according to the magazine, provides “proof of the unheralded diversity of the late-’80s Los Angeles music scene… The band really hits their stride whenever they’re playing on the edge (as on the burning “Sick Friend”), but they also occasionally temper the wildness with dreamy numbers such as the title track.” Read the review here, and get Mercury Blues + Skulduggery spinning now.