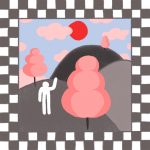 From September 2019 to early March 2020, Julia Bhatt experienced a whirlwind of life changes: she released her first three singles (“Tall,” “Marco,” and “I’m Cool”), turned 18, and graduated high school. Just as she was really getting started – with the announcement of her first-ever tour, nonetheless – the COVID-19 pandemic brought everything to a standstill. Holed up in Miami, several states away from her mentor and producer Elliot Jacobson (Ingrid Michaelson, Elle King) in New York City, she started to write songs on Ableton Live rather than on the guitar – a whole new creative experience for her. This led to singles “Miami” and “Bird Girl,” as well as her debut EP 2 steps back, and now the it is what it is LP, available this summer.

The first official single off the album, the jangly indie pop “Cotton Candy,” is out now. Bhatt says the track is “a love song of sorts, not necessarily about someone, but more of a feeling that can come from someone. It’s about feeling safe being on the edge and comfortable in foreign places… kind of like a rollercoaster. You put your trust in the thrill, sorta.”