New Music From The Builders and The Butchers 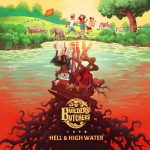 The Builders and The Butchers formed in the fall of 2005 in Portland, Oregon. The band’s first two years consisted of busking, house shows, and showing up unannounced anywhere people were gathered. Folks began to take notice and the band transitioned slowly, going from playing on the floor of venues unplugged to gradually adding mics and amps while organically growing into one of the most exciting live acts in the Pacific Northwest. Even when plugged in, a cornerstone of almost every Builders show is playing on the floor at some point during the set. They gathered a dedicated fan base across the US and Europe while touring relentlessly from 2007-12, playing dozens of music festivals like Sasquatch and Lollapalooza, and supporting artists like Portugal. The Man, Amanda Palmer, Murder By Death, and Heartless Bastards. In the past few years, band members of The Builders and The Butchers have laid roots all around the world, coming together for shows, writing, and tours whenever they can.

Within the context of the pandemic, wildfires, and civil unrest, Hell & High Water was a challenging yet cathartic record to make. The Builders wrote Hell & High Water together at the marina where band member Willy Kunkle lives, an inspiring setting for their creative process fueled by long nights drinking beer and whiskey around a fire. After laying down the initial studio drum tracks with Badman label head Dylan Magierek, though, the band was forced to finish writing and recording remotely – a massive challenge that pushed them past their usual comfort zone.  Multi-instrumentalist Ray Rude and Engineer Edgar McCrae molded and formed this album into life over the course of 2020, aiming to create something that reflects the struggles, the pain, and the amazing moments from the past couple of years.

“For more than a decade, the members of The Builders and The Butchers have specialized in a kind of white-knuckle Americana: Their acoustic folk-rock sound is shot through with nervy, hellfire-and-brimstone intensity. The Portland-born band’s hometown brethren in The Decemberists provide a useful reference point — singer Ryan Sollee has a wide-open bellow and a gift for vivid imagery.” – Stephen Thompson, NPR Music

“They’re poetic and captivating, and do to songwriting what Clint Eastwood does to movies.” –Consequence of Sound