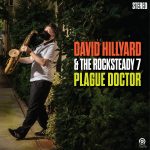 David Hillyard & The Rocksteady 7 are back with Plague Doctor, their first release since their 2018 album The Giver. The New York-based group features some of the best players in the current ska/reggae scene, including longtime percussionist Larry Mcdonald (Toots & The Maytals, Gil Scott-Heron, Lee “Scratch” Perry, Taj Mahal, Bad Brains) and members of New York ska staples The Slackers. The group’s signature sound combines elements of American jazz with Jamaican influences as well as classic Brazilian rhythms and themes. Since forming in 1992, The Rocksteady 7 has played all over the world, from the clubs of New York to the Toronto Jazz Festival and tours in Spain, France, Belgium, the Netherlands, Switzerland, and Germany. The new LP explores tunes originally by Brazilian musicians such as João Donato, Artur Verocai, and Jorge Ben alongside originals inspired by the likes of ​​John Coltrane, Lester Young, Ben Webster, and The Skatalites.

The album was recorded during the pandemic in a city that was in its grips. In a recent interview with It’s Psychedelic Baby Magazine, Hillyard explains, “I had people around me die and others get really sick right away. Covid got real for me very quickly. There are so many things that I used to enjoy doing that I don’t do anymore. I live in a city. In a neighborhood for a reason. It’s what sustains me… I recorded a lot of music in 2020 and 2021. Including Plague Doctor. It’s a way to still be alive in difficult times.” Because the musicians could not record in the same room, the record was made by “emailing tracks from one musician to the next and then each would add their parts to it. So each person improvised off the last person’s part. It’s amazing how organic it all sounds… I’m lucky to play with people who listen to the other musicians around them… Everyone also has a sense of space. That they play what is needed for a track, not everything that they could play.”

“In the ultimate ska band made up of active players, Dave Hillyard would be my choice for tenor sax.” – Reggae Steady Ska

Goes For Adds May 17