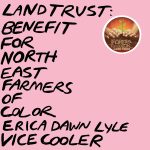 In March 2020, with Bikini Kill’s anticipated reunion tour canceled, the band’s new guitarist Erica Dawn Lyle and drum tech Vice Cooler were wondering how to be useful. Lyle, an arts critic, author, filmmaker, organizer, and free improvising experimental guitarist, reached out to Cooler, a photographer and video director who is also a producer for acts like Peaches and Ladytron as well as the drummer of The Raincoats, with the spark of an idea for a digital album to generate funds. The duo soon devised a remote process of recording: Cooler sent Lyle the drum parts, over which Lyle improvised guitar riffs. Then, they began reaching out to an array of guest vocalists in their extended community to contribute original lyrics and vocals. “Working on these songs everyday with Vice—and the hope that others would work with us—was like an anchor for me during that really difficult era,” Lyle says. A mix of industrial, art-rock, post-punk, and beyond, the collection finds germinal punk icons like The Raincoats, Kim Gordon, and Alice Bag alongside younger artists who they’ve inspired over several decades. All profits will benefit Northeast Farmers of Color Land Trust (NEFOC), an Indigenous-led grassroots organization that acquires farmland in order to return it to Indigenous nations and to reconnect POC farmers to land stewardship and control.

Across sixteen blazing, high-octane tracks, the music of LAND TRUST is guided by a spirit of improvisation and ingenuity, an energetic antidote to the era of restless ennui that spawned it. “This is the very, very rare benefit album where no one just sent in some crappy B-side,” says Kathleen Hanna, who features on the record’s first single, “Mirrorball.” “All the songs are great and the performers really put their hearts into it. It’s a testament to Erica and Vice doing a phenomenal job bringing people together.” That includes the garage-pop daydreaming of acclaimed author and artist Brontez Purnell; the signature spiky poise of DC’s Christina Billotte (Slant 6, Casual Dots); and new wave anthems from the likes of Glasgow’s Rachel Aggs (Trash Kit, Shopping), former Priests vocalist-turned-avant pop firebrand Katie Alice Greer, and Control Top’s Ali Carter. Sometimes the record’s cross-generational conversation happens within a single track—like on “Lost in Thought,” a ripper featuring vocals from ascendant teen quartet The Linda Lindas plus bass by Bikini Kill’s Kathi Wilcox, or on “Hearing Myself Again,” where Lyle and Cooler are joined by New York experimental punk trio Palberta in collaboration with Raincoats violinist Anne Wood. Other contributors include Deerhoof’s Satomi Matsuzaki, Mike Watt, Kelley Deal, and Cooler’s neighbor in L.A., bassist Emily Retsas (Phoebe Bridgers), who served as a third core member of the recording process. According to Lyle, “It became this all-ages show for feminist rockers.”