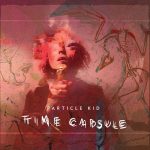 In advance of Father’s Day, Particle Kid (J Micah Nelson) has released a new song in collaboration with his dad, the legendary Willie Nelson. “Sometime back in December 2020, in between endless rounds of chess and dominos, my dad looked up at me and said, ‘If I die when I’m high I’ll be halfway to heaven,’” Micah says.  “It took me a second to process, but I said, ‘Dad, that’s the best song title I ever heard. You better write the rest of it quick.’ He said. ‘Why don’t you write it?’ So I did. That night I wrote it for him, about him. It’s really just a love letter to him.”

The song has been appended to the second disc of Time Capsule, a new album that finds the singer, songwriter, and multi-instrumentalist pulling listeners down the rabbit hole to experience the music he’s been making over the past five years. Described by Rolling Stone as a “trippy troubadour” and a “musical polymath who combines an indie DIY aesthetic with a questing hippie spirit and a relentless work ethic,“ Particle Kid is a constantly absorbing and evolving musician who has both musical DNA and professional experience backing Neil Young (along with his brother Lukas Nelson & Promise of the Real), collaborating with John Doe, Tinariwen and the Flaming Lips and working on his own projects like the psych-punk orchestra Insects vs. Robots. Micah’s dad helped name his band: Micah rolled into the house one day and Willie meant to say, “Welcome home, Prodigal Son!” but he had just burned a fat one and it came out as, “Welcome home, Particle Kid!” instead. The new album takes listeners on a nearly two-hour trip through various genres, ideas, and sounds, creating an eclectic palette of sonic colors and feelings – both familiar and exploratory – painted together like a collage. It sounds as if 90s alt, 60s psych, 70s electric jazz, and some abstract future were all magazines—chopped up and somehow cohesively glued together by Nelson’s voice and lyrics. The album feels like an organic, laidback friends and family affair, with many of the guests and influences being the people with whom he plays and tours, including Sean Lennon, J Mascis, Sunny War, Margo Price, The Lovely Eggs, Moskito, Jim James, Paul Bushnell, Mickey Raphael, Raman Steve, Jeremy Ivey, Eric Sullivan, The Nerfs, Nikitia Sorokin, and Dave Ralicke.

We have updated our digital servicing of the full album to include this new track. For those who already have the full album, we also have a version available with only the digital bonus tracks. Find them on our website.The following information pertains to the full 2xLP package: