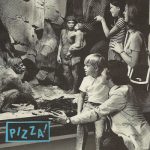 Originally called The New Motherf*ckers, Pizza! was among the seminal DIY bands in Los Angeles from 2006 to 2011. Operating out of a communal house in Echo Park, vocalists and multi-instrumentalists Geoff Geis, Alex Myrvold, Tyler Sabbag, Duncan Thum, and Rand Voorhies crafted a manically creative amalgamation of new wave and progressive rock and gained notoriety for energetic live performances at premiere underground venues such as Pehrspace, The Smell, The Echo’s Part Time Punks, and more. Members also participated in multiple other projects, including Big Whup, Liars, Fol Chen, So Many Wizards, Walter Meego, Evan Voytas, and the LA Lottery League. The band’s recorded material is chameleonic, combining studio and home-recorded elements while moving through genre and moods at a breakneck pace that anticipated the schizophrenic stylings that would come to dominate the musical decade after the band’s dissolution. Since disbanding, members of Pizza! have continued to collaborate in various forms, with all members contributing to the recording of Geis’ upcoming album under the name Soft Sailors.

The band’s only studio album, We Come From The Swamp, sounds as fresh today as it did upon its release in 2012 and even has something to say about the world of today – as on album opener “Buttersaw,” with lyrics about millennial American ennui that may even ring truer today than it did then. Produced by Thum and Sabbag, who have gone on to work extensively on film and television scores including Netflix’s Chef’s Table (for which they’ve been nominated for two Emmy Awards), the LP is is anchored by epic, absurdist pop excursions like “Big Mammoth Skull,” “Riding Through The Jungle,” and “Saturday Night.” This new, expanded edition of We Come From The Swamp appends as bonus tracks the handful of singles the band released between 2008 and 2011. Recorded primarily at Moonshine Studios in Los Angeles, songs like “Gay ‘Hotel California’” and “Our Number One Sound” show off the band’s early identity as a speedy, guitar-driven punk act, while “Houses” and “Bird Dreams” hint at their more-electronic future. This collection also includes “Modern Love,” a David Bowie cover featuring gorgeous saxophones and clarinets provided by producer/engineer Eugene Toale (Kanye West, Las Cafeteras), and Kid Infinity’s revved-up dance remix of “Riding Through The Jungle.”

“An honest comparison would be to the classic albums of the Mothers of Invention, not so much in style but in creativity, humor, and album structure.” – LA Record

“Pizza! sounds as if Why’s wily spoken-wordisms were put through an Austin-in-the-90s Gen X filter… with a penchant for deft hooks and a genuine pop sensibility [that] bursts with a weirdness that comes across like party music for dadaists stuck in a Trapper Keeper.” – Refinery29