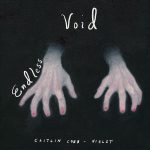 Beyond The Short has the video for Cailtin Cobb-Vialet‘s “Disco Ball,” from her LP Endless Void. The site quotes video director Alex Bush, who says, “The song is spoken through popular aesthetics that pull at Caitlin’s heartstrings. I wanted to build a similar relationship between the video and cinematic aesthetics that spark that same passion in me, and could also fully mine Caitlin’s rich screen presence. The story and style emerged quickly from there, fusing the seductive, sterile voyeurism of erotic/psychological thrillers with the luscious passion of musicals and melodramas. I quickly found that pop music video logic was a very natural binding ingredient for these two styles. It’s so obsessed with the body as both a presented object and a tool for emotionally expressive rhythm and works best stretching in between those contradictions.”