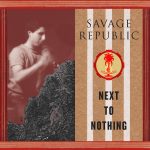 Full details are confirmed for Independent Project Records‘ release of the previously unreleased archival concert set by Savage Republic, Africa Corps Live at the Whisky A Go Go 30th December 1981, coming out on November 18, 2022. Clocking in at 37 minutes, befitting the band’s opening slot on the bill that night, the ten tracks include early and notably different versions of songs that six months later would appear on the band’s seismic debut LP Tragic Figures. This previously unreleased archival set was recorded just nine months after a group of young UCLA students – Bruce Licher, Mark Erskine, Philip Drucker and Jeff Long – started playing together, originally calling themselves Africa Corps, and making their way in Los Angeles’ punk underground. The original cassette of the Whisky’s board recording has been remastered for this release by Warren DeFever (His Name Is Alive) and unearths a cathartic performance. In different hands, the band’s amalgamation of punk, industrial, art rock, psychedelia, Eastern sounds, avant-garde, no wave, surf and minimalism would have eventually proved contrived, pretentious, or at least confusing. But as the loud Whisky crowd – regulars mixing with friends, art school students mixing with tough punks – seems to suggest, with Savage Republic it worked, as if by magic.

And as if by magic, it still does. “Next To Nothing,” the second song from the set, is at radio now as an advance single.