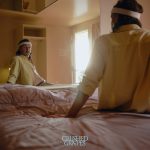 The CBC says “there’s an unsettling yet intriguing disconnect between the soothing folk-pop of Jason Bajada‘s ‘Zombie Cry’ and the alarming scene whose aftermath he describes in the song’s lyrics. ‘Never thought this day would end/ In the back of an ambulance,’ he begins with a detached tone over gently strumming guitar. One imagines him sitting in the dark, trying to come to terms with the day’s events: ‘Just a zombie cry, then you went down/ Thought you were just fooling around/ Can’t remember the last time I had ever felt so afraid.’ That fear takes the form of otherworldly, off-kilter strings that disturb the calm of an instrumental interlude between the second and third verses before Bajada returns with his hypnotic melody.'” Hear the song via the CBC here, and get Bajada’s LP Crushed Grapes going at your station.