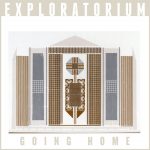 Exploratorium – the eponymous album by Bruce Licher (Savage Republic, Scenic)’s experimental solo project – was originally released as a mini-CDr mounted on a twelve-inch sheet of heavy card stock letterpress printed in seven colors as a limited edition of 300 signed and numbered copies. Now, the album’s three immersive solo recordings have been expanded with the addition of  a fourth 26-minute track to be released as a regular-sized CD packaged in one of Licher’s iconic oversized letterpress-printed pocket folders with inserts. The original three tracks were recorded in the Summer of 1997 on a 4-track cassette and are now augmented by the atmospheric electronics of “Number 09,” a song composed on an old Roland SH-2000 synthesizer whose title is a clear nod to one of The Beatles’ most adventurous compositions. Exploratorium has been remastered by Josh Bonati at Bonati Mastering in Brooklyn and reclaims equal fondness for the natural and the industrial.

Licher’s mission is an exploration of sound that feels scientific and transcendental at the same time. Get advance single “Going Home,” a mesmerizing soundscape, on the radio now.