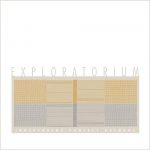 Upon its initial release in 2007, Bruce Licher‘s Exploratorium was reviewed in Rolling Stone by none other than David Fricke. According to the venerable scribe, the EP presents “billowing minimalism…  ‘Peak,’ ‘Going Home’ and ‘The Penstome Field’ [sic] total twenty-two minutes and are four-track home recordings from 1997 — overdubbed guitars, bass and Martian-ocean echo — that combine the industrial ghost dance of Savage Republic with Licher’s passion for Ennio Morricone.” Read the review here.

Now, Exploratorium has been expanded to include bonus track “Number 09,” more than doubling the total runtime. Get it on the air now.