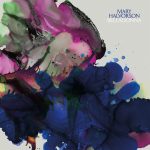 Nonesuch Records presents Belladonna, the second of two twin label debut albums (preceded by Amaryllis), from Brooklyn-based guitarist, composer, and MacArthur fellow Mary Halvorson.  The two suites, which Halvorson describes as “modular and interlocking,” were produced and mixed by John Dieterich of Deerhoof. Belladonna is a set of five compositions written for Halvorson on guitar plus The Mivos Quartet: Olivia De Prato (violin), Maya Bennardo (violin), Victor Lowrie Tafoya (viola), and Tyler J. Borden (cello). It is Halvorson’s first time writing for a string quartet; Mivos’ parts are through-composed and augmented by Halvorson’s guitar improvisations. Halvorson says, “Around the same time [as I was making Amaryllis], I was listening to a lot of string quartet music. I had a few orchestration books lying around my apartment, and ample time to take composition lessons. Writing for string quartet has always been a dream of mine, but something that seemed intimidating and somehow out of reach. But with a clear schedule and endless days stretching out in front of me, it felt like the right time to finally go for it.”

“An unflinching original who has revealed new possibilities within the music.” —New York Times

“During the last decade, Halvorson has reimagined the rules and roles of jazz guitar by pairing a graceful approach to melody with an iron will to warp, corrupt, and subvert it.” —Pitchfork

“The most future-seeking guitarist working right now, thinking out the instrument on a level most couldn’t comprehend.” —NPR