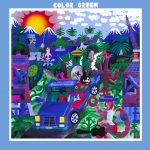 Aquarium Drunkard has included Zachary Cale‘s Skywriting, which we serviced to radio this year, among its top albums of the year. The record is Cale’s “best, most powerful album since Duskland convenes a full band to put a cosmic, psychedelic gloss on his introspective songs. “Come on Easy” shimmers with layered guitars and pulses with motorik drums, a rupturing lick puncturing its easy-going vibe. But it’s spirally, world-bending “Page by Page,” that takes you out of body, in dueling guitar lines that sound like Television, but country.”

Also on the list is Color Green, whose self-titled album AQ helped release alongside ORG (who also released Skywriting). According to the article, the album provides an “expansive country-hued choogle that demands you get up and groove. Color Green absolutely knock it out for their debut LP. With a sound that offers the Stoney bliss of the 90s jam scene (with none of the excessive obnoxiousness associated therein) and the fine-tuned precision of The Meters’ swampy funk, Color Green sets a high standard for the duo.”

Congratulations to both artists! Find the full collection here.