Exploratorium and Savage Republic Are In The Pipeline 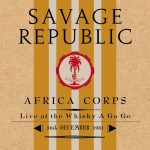 Pipeline Instrumental Review, a print magazine, has reviews of the new Independent Project Records releases from Bruce Licher – Exploratorium, an ambient solo work recorded in 1997 and originally released in 2006, and Savage Republic‘s Africa Corps Live at the Whisky A Go-Go 30th December 1981. On Exploratorium, the zine writes, “Licher stretches the roles of guitars and bass to create an a absorbingly sparse synthy atmosphere which transports the listener to a hauntingly mesmerising dream world,” whereas the live Savage Republic disc displays “entrancing rhythms.” Learn more about Pipeline here.