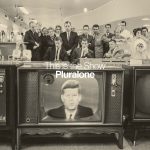 As Q104.3 New York notes, “Josh Klinghoffer has been more than a little busy since leaving the Red Hot Chili Peppers in late-2019.” In addition to being the man behind Pluralone, Kinghoffer has helped Eddie Vedder write and record his solo album, toured as part of Pearl Jam and Jane’s Addiction, and collaborated with Morrissey and Iggy Pop. In a recent interview with the station, Klinghoffer spoke about all of these collaborations as well as the new Pluralone LP, This Is The Show, which is at radio now from ORG Music. “It was all a quick burst of inspiration, born of the possibility of doing a collaboration again with the band Dot Hacker,” he says. “All those songs were written in a couple weeks. When the idea of doing it as a four-piece collaborative project kind of dissolved and it became just Clint Walsh and myself, I came to New York actually for a couple months and finished off the writing. It was recorded throughout 2021.”