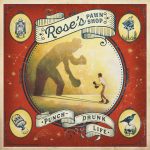 Glide Magazine has a review of Punch Drunk Life, the forthcoming new LP from Rose’s Pawn Shop from which three advance singles are at radio now. “The band has refined its signature mix of bluegrass instrumentation with roots-rock flourishes,” the site tells readers. “One of already three released singles… ‘Ghost Town’ [is] about facing a crossroads, grappling with the loss of a shattered relationship, and building the inner resolve to start anew. The song is also symbolic of the kind of small towns and isolated places where the band often plays. The other singles are ‘Gratitude’ and ‘Better Now.’ The soaring harmony of the former meshes with the nimble picking to celebrate the life of a departed loved one while the latter was written after Givant’s return home from an epic tour through Alaska and Canada during which he’d been missing the woman who would later become his wife. It also carries a celebratory vibe, the kind of melody you want to sing along with on a joyous car ride.” Read the full review here.

All three of those songs mentioned are on our download page, and the album comes out at the end of next month.