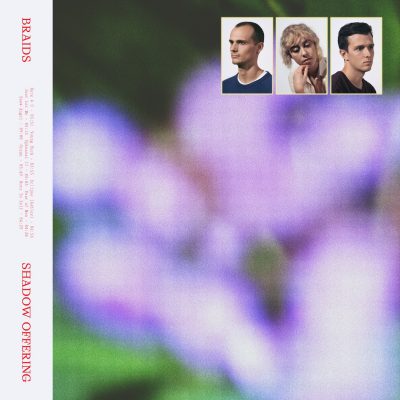 Formed in 2007, Braids have solidified a long reputation for musical ingenuity and have established themselves as one of Canada’s most acclaimed art rock bands. The three piece band – Raphaelle Standell-Preston (lead vocals, guitar, keys), Taylor Bonner Smith (bass, guitar, percussion), and Austin Tufts (drums) – weaves organic and electronic elements together amidst a lyrical landscape that is intimate and emotionally immersive. Formed in Calgary, the group moved to Montréal to record their debut album Native Speaker. That record, which was short-listed for the 2011 Polaris Music Prize, was followed by 2013’s Flourish // Perish and the Juno Award-winning Deep in the Iris. Now, the trio is prepping the release of Shadow Offering, a luscious and expansive release that leads listeners through a sonic tapestry of narrative. With heart-breaking honesty and precision, listeners traverse a nuanced and complicated world: one full of beautiful contradiction. Although the album directs itself at the failures of people to love and be loved, it also seeks to restore justice and attain blissful union. Its arc crests through the dark towards the light and learns how to dance with the dizzying rhythms of the heart. The songs bubble, sustain, dissolve, expand, and retract. Out this April via Secret City Records, it was produced by Death Cab For Cutie‘s Chris Walla. Pushing the band out of their comfort zone, Walla worked to both break and unified the band’s dynamic, unearthing individual creative energy long buried over the years. With a new sense of confidence, listeners will find Braids at their most personal, unabashedly flexing through their new music.

Now available is advance single “Young Buck.” According to Standell-Preston, “We wrote this song to capture the nervous anticipation of desire, the delicate chase of seduction, the highs and lows of obsession, and the humour in between. To want to possess someone, make them desire you, fall for you, only to learn that to lust is not to love.”

“A playful electronic jaunt that toys around with concepts of love, lust, and possession.” –Stereogum