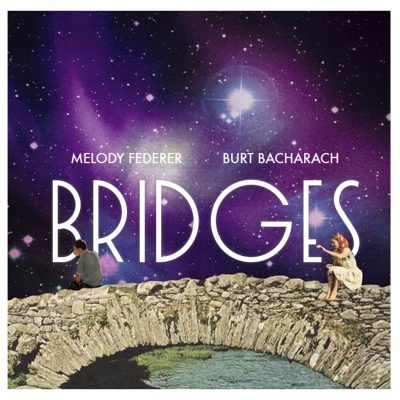 Burt Bacharach and Melody Federer – a match made in musical heaven – have joined creative forces for “Bridges,” their first collaborative effort. Bacharach, a pop culture icon and one of the world’s greatest contemporary composers, is entering the eighth decade of a career that has spanned generations and continents. Federer, a noted solo artist as well as an accomplished writer for various musicians, is a genre-agnostic and candidly charming artist who can capture a room with just her voice and guitar or with a full band. According to Bacharach – who has worked with everyone from The Shirelles to Dusty Springfield to Elvis Costello – she’s “an amazingly good and quick writer” with a breathtaking voice whose “mind is trigger fast when coming up with good, fine, intelligent lyrics. No wasted words.” Federer adds, “Burt is… witty and quick, funny and kind. He’s razor sharp and he has this way of commanding a room, a whole orchestra, without even saying a word. But some of my happiest moments have been just sitting down with him…  Even with all the GRAMMYs and Emmys and Oscars, he is just so genuine and down to earth.”

“With ‘Bridges,'” she continues, “he asked me to send him some poetry I’d written. I sent him one I’d originally called  ‘4 a.m. Poem’ because I’d sent it to someone I had been in love with for many years at 4 a.m. one morning after a show… [What he wrote] took my breath away. It was epic and powerful and everything I’d wanted to convey with the words, except now Burt had given the words a heartbeat. He’d totally elevated and transformed my little poem into this heartbreakingly beautiful ballad.”

“A beautiful love ballad with lush production, reminiscent of the grandeur of 1970s staples from Linda Ronstadt or Dionne Warwick. It features lyrics penned by Federer, music composed by Bacharach, and production from Daniel Tashian (Kacey Musgraves‘ The Golden Hour). The track shuffles along with a strong vocal melody and baseline that provide the perfect backing for the piano and strings to dance around. The track would work as a breather on the dance floor and also has a strong enough groove to support an up-tempo remix.” -American Songwriter