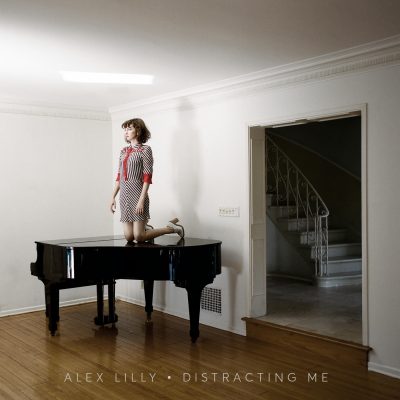 Los Angeles-based artist Alex Lilly is a renaissance female. In addition to writing, producing, and playing in her own musical projects – including Obi Best, The Living Sisters, Touché, and Zero DeZire –  she’s established a notable career on the road in the touring bands of  esteemed musicians like Beck, Lorde, Ry Cooder, and the bird and the bee. On her debut LP, 2% Milk, Lilly brings her singular voice to the table. Lilly’s songs – she describes her sound as “sexy psychological thriller” – are synthy, syrupy, and suspicious. Due in January, 2% Milk will be the first release for Inara George‘s newly-formed Release Me Records. George, who has played with Lilly in the bird and the bee, explains, “I started Release Me to shine a light on Alex, and all the other insanely gifted musicians I’ve had the pleasure of working with.”

Lilly’s ability to take a song out of the realm of merely entertaining to intriguing is all over the album’s first single “Distracting Me,” a tune dedicated to the idea of enjoying the annoying. “Most of the time, I don’t like distractions, they get in my way,” she sings. “What made you the exception? Showing up and all I can think of to say: I love it when you are distracting me from what I think I need to do.”

“A light (but not slight) pop song with a punchy beat and engaging twisty-turny melodies.” -LA Record

“a peppy, synthy prance between handclaps and bass that stop and start in a way sort of mimicking the distraction itself.” -Buzzbands