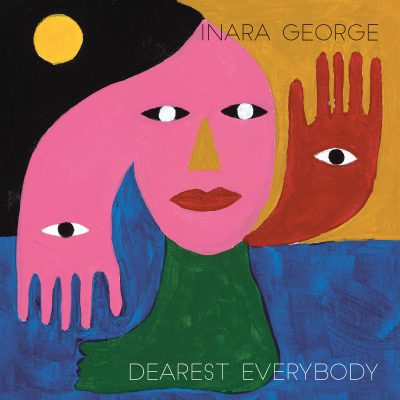 On the day Inara George turned five years old, she attended the wake of her father, musician Lowell George, the beating heart of the band Little Feat. As anyone who has lost a parent or a close loved one knows, the grief – as well as the gratitude that their lives touched yours – spreads out for years and creates rivers of emotions that must be navigated, side-stepped, sometimes drained. On Dearest Everybody, her first solo album since 2009’s Accidental Experimental, George mines that initial loss and others to explore the sorrow, as well as the joy, that can be found in the rockiest of places. Sometimes the line between joy and sorrow is hard to parse, as she sings on the opening song, a tender, uplifting homage to the messy thrill of growing up called “Young Adult.” On “Release Me,” George sings about her father’s loss from her mother’s perspective. A few of the songs, including “Tusker 4,” “Slow Dance,” and “Take Me to Paris” stem from her annual tradition of writing a song for a dear friend’s baby who was lost in childbirth, while the sweetly playful “All for All” was written for her producer Mike Andrews about a funny misunderstanding between him and his elderly father in his father’s last few days.

George originally set out to record the album on her own, between raising her three children and working on her various projects including the bird and the bee and The Living Sisters, but eventually she reached out to Andrews, her collaborator on all her solo albums including her breakthrough LP All Rise from 2005. The two recorded whenever their schedules yielded, and occasionally called in friends to play. The hallmarks of the bird and the bee (her collaboration with Grammy winning producer, songwriter and multi-instrumentalist Greg Kurstin) and the Living Sisters (with singers Alex Lilly, Eleni Mandell and Becky Stark), are all present here: soaring melodies, airy vocals that swing high and low, and exquisite touches of keys and strings that never overwhelm. Yet the final result is unique. Dearest Everybody is Inara George’s story, in music and in life – of taking the losses that formed her and strengthened her, and of sharing them with the rest of the world.

“Her first solo album since 2009 exhibits an idiosyncratic voice also present in Inara’s other projects, an attribute producer Mike Andrews knows how to frame with sensitivity.” -Glide Magazine