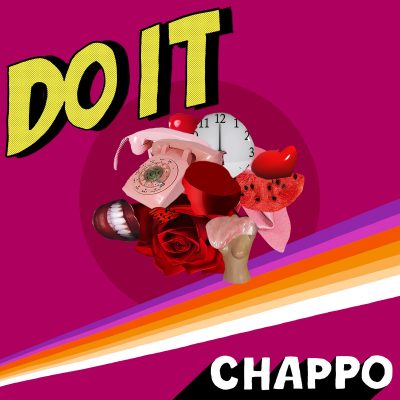 CHAPPO’s third studio album, DO IT, was born of tragedy. On the heels of touring behind their second LP, the dense concept LP Future Former Self,  singer Alex Chappo, guitarist David Feddock, and keyboardist Chris Olson all returned home. Their holiday was short-lived, however, as a series of tumultuous events occurred in succession: the band parted ways with longtime drummer Zac Colwell,  a record was begun and abandoned,  Chappo’s best friend committed suicide, and Freddock and his wife lost their young son, Winter. The remaining three members of the band scattered in the wake of this period, and the future seemed bleak.  “We were acutely aware that at any moment the whole thing could unravel or fall apart,” says Chappo now. Yet ultimately, the band began playing again, taking solace and processing the events through their music. “Almost immediately after losing our son I had a moment of clarity,” Freddock explains. “More than ever, all the life and love that was missing needed to come out through the songs we were working on.”

The resultant album, DO IT, is a lithe, spangled tumble of a record that strikes at the wild heart of things by paring their sound down to its most primal and joyful components. From the smoldering “White Noise,” to the bouncing and funky catharsis anthem “Cry On Me,” to the kaleidoscopic, synth-tinged world of “Live My Life,” DO IT manages to transmogrify all the less-than-great parts of being a human being into a throbbing, galactic party. The departure of their drummer, who also produced their first two albums, led the band to John Vanderslice, who invited them to record at his analog Tiny Telephone Studios in San Francisco. The process forced them to make quick decisions, melding nicely with their stripped-down approach. Vanderslice encouraged them to approach the songs they’d written with a sense of spontaneity. “On the last two records, we were were obsessed with listening to each take,” says Chappo, “We’d finish a take and would expect to be able to listen back and see if we nailed it. But John wouldn’t let us. He’d say ‘Either you got it or you think you can do better and we burn that take. You don’t get to listen back and psychoanalyze everything to death.’” In the end, the creation of DO IT was an exercise in letting go. The members of CHAPPO, in the midst of personal tragedies and tumult, surrendered control in order to create their most fun, joyful work. Maybe, as the making of DO IT suggests, the way out of sorrow is surrender.

“Do It is filled with upbeat anthems of perseverance and honors the pursuit of passion. While the band’s first two albums, Moonwater and Future Former Self, exuded a carefree buoyancy, their latest adds a contemplative spirit.” -AllMusic

“To present a track as buoyant, and life affirming as “Cry on Me,” in the face of tragedy is an incredible feat that CHAPPO has tackled with tremendous grace. The warm/relaxed yet pristine style from producer John Vanderslice shines through.” -KCRW