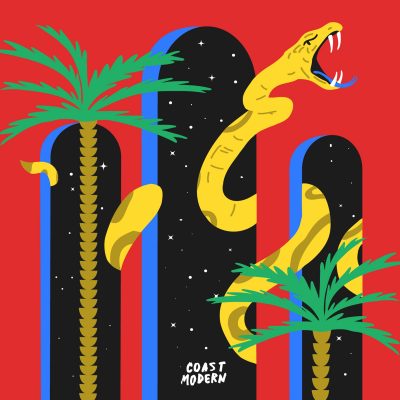 Coast Modern is what happens when you let go of what you always thought you wanted and embrace the unexpected. Luke Atlas and Coleman Trapp met while working as Los Angeles-based songwriters, fellow rats in the race to land songs with mainstream pop artists. After a couple of years without much success, they’d each nearly given up – Trapp even left LA for the mountainous serenity of Colorado – but found new inspiration by collaborating with each other via email. Since then, the pair has developed an aesthetic that combines their admiration for the spirit of misfit alternative bands and the fearless ethos of modern hip-hop. Their tunes have blasted up the Hype Machine charts, with multiple singles charting at #1 or #2. Their eclectic sound has been played on KEXP and KCRW, racked up more than 20 million streams, and caught the ears of media including Pigeons and Planes, Billboard, Vanity Fair, Entertainment Weekly, NYLON, and Interview Magazine. After playing their first ever shows at SXSW in 2016, they were scooped up to go with acts including BØRNS, The Wombats, and The Temper Trap on nationwide tours.

The duo now releases its first full-length, Coast Modern, which includes viral hits like “Animals,” “Hollow Life,” “The Way It Was,” “Guru,” and “Dive” – called a “poolside banger” with “all the elements that make for a perfect summer night” by Billboard. For fans who’ve already fallen for these large, anthemic, and hook-filled tracks, the LP has more nuggets that beg to be blasted (like album opener “Going Down,” called a “surf rock opera” by the group) along with quieter moments (such as the surprisingly-delicate acoustic album closer “Frost”) that offer a glimpse at the breadth of Atlas and Trapp’s considerable talents. Produced by the duo, this generous debut precedes a comprehensive US tour this fall.

“The Los Angeles duo finds a sweet spot with pop melodies, unforgettable hooks, and elements of rock, and the reception has been fantastic.” -Pigeons & Planes

“If Animal Collective were an upbeat alt-J, they’d be Coast Modern.”-Consequence Of Sound