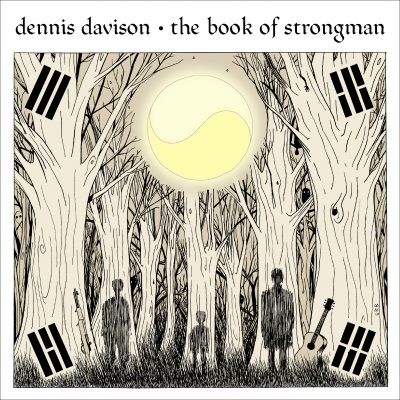 The Book of Strongman is the debut solo album by Dennis Davison, who was the lead singer and songwriter in the Grammy-nominated band The Jigsaw Seen and also the lead vocalist for neo-psych pioneers United States of Existence, whose catalogue will get a vinyl release in 2020 on Spanish label Guerssen Records. Inspired in part by months of listening to Robin Gibb and Faust, The instrumental template for the album is adventurous, with Mellotron, Monotron, Rhythm Ace, Blipblox and an assortment of analog synths enhancing the atmospheric mood and complimenting the bass, drums and guitars. All of the sounds on The Book of Strongman were created by Davison except the white noise feedback on closer “What The Hell Is That Noise?,” sourced from a 1980 cassette made by his experimental childhood duo Bizarre Trolls. That song’s title sprung from the mouth of Davison’s father, who heard the Trolls’ cacophonous sound emanating from the basement one day after he returned from work.

The LP is brimming with highly personal and sonically surprising songs. Album opener “Strongman and Sonny James” tells the tale of a 15 year old soldier who finds himself in the midst of the Korean War in 1950. By song’s end, Davison has woven the true tale of his father and his army comrade, country singer Sonny James, into his own story of a fictionalized superhero called Strongman. Dennis created the Strongman character when he was a child, based on his father. The battle theme continues on “Heaven Bound,” where mental illness is the issue at hand. “Can You Imagine?” takes on social anxiety, “The Spoken Word” contemplates a war between the spoken word and the written word, “In The Folly Of Youth,” while single “Shadow On A Tall Tree” soars like the sparrows the song references. The album’s final two songs are cut from the same cloth, but constructed in very different ways. “Aberdeen Vista” and “What The Hell Is That Noise?” were both written about the Baltimore house where Davison grew up — the former is told in a straightforward and sentimental way, while the latter is more lyrically abstract and musically dissonant.