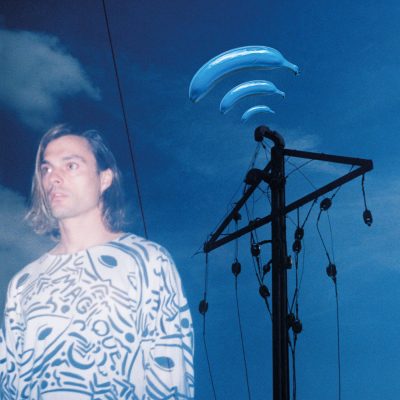 Banane Bleue is the newest album from the British-French act Frànçois & the Atlas Mountains, led by François Marry. Banane Bleue (French for “Blue Banana”) is a nomadic and truly European record, hailing from rented workspaces in some of the continent’s key cities – Berlin, Athens, Paris – and recorded with instruments that were often borrowed from likeminded musicians. The record was written by Marry alone; close collaborator and Weird World artist Jaakko Eino Kalevi was enlisted for production duties whilst Renaud Letang (Feist, Gonzales, Connan Mockasin) mixed the album.

The title of the album is taken from the “blue banana” concept, a geographical theory that groups together a corridor of Europe’s biggest cities, originally conceived in the 1980s. The theory states that the blurring of these cities’ boundaries has resulted in the formation of one massive, interconnected megalopolis. Expanding on the theory, Frànçois poetized it, picturing a luminescent blue banana shape that you can see from space with vibrant, ethereal currents that surround and bind us. It explores common cultural and romantic ground, creating an album full of missed meetings and misunderstandings. On the theory, Merry notes: “I have often asked myself what my relationship history would be like if I had been born on another continent. Our idea of love, which comes from the 18th and 19th centuries, is ingrained in the walls and aromas of cities, cafes, nights out in bars, text messages, artificial lights, romantic getaways and city breaks; as if European electricity emitted some kind of romantic scent.” This electric grid of romance is personified in the blue banana concept.