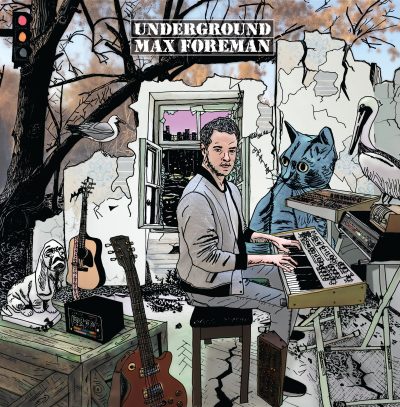 Underground is the debut solo release from Los Angeles-based songwriter and producer Max Foreman. A figure in the West Coast music scene for two decades, Foreman is best known for his keyboard and vocal work in the electric pop duo Bouquet and as guitarist of the San Francisco math rock trio Tenebre. On his new EP, Foreman’s meticulous songwriting has delivered a classic work of pop surrealism.
Layers of guitar and analog electronics invite the listener into Underground’s playful and idiosyncratic landscape.

The mid-tempo bounce of “State of Decay” finds detuned keyboards encircled by sweeping Laurel Canyon harmonies. “Second Time Around,” a Zombies-influenced earworm dipped in Mellotron and organ, is turned upside down with blissfully-warped synthesizers and guitar overdrive. Foreman’s production reveals hidden electronic gems in every verse, and the lyrics of Underground oscillate between serenity and alienation, searching for moments of reprieve in the midst of unprecedented crisis. The story unfolds in fragments—the prematurely changing seasons, the sensation of radiant city lights, and in the title track, an earthquake striking just minutes after midnight. Sometimes, as Foreman intones, “Heaven speaks from underground.”

“Hushed, hazy synths bleed all over ‘Open Eyes,’ and the melancholy and circumspect nature of it, meandering beats and picked guitar lines, gives it this sort of indie feel – however, there a pop sensibility about it to, not least the scattering beats and clear production. What really makes it though is the singalong chorus, that catches your breath and captures your heart.” -Backseat Mafia