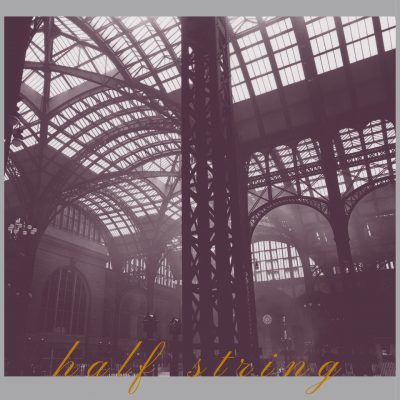 Independent Project Records is proud to reissue the 1996 debut shoegaze/dream pop album by beloved Tempe, Arizona band Half String,  A Fascination With Heights, available via Darla Records. The long out-of-print album was originally only available via Compact Disc and is now on vinyl and streaming services for the first time. The expanded CD / 2xLP reissue adds more than 35 minutes of previously unreleased tracks, newly excavated from the original recording sessions. Additionally, the package includes new artwork based on the original album artwork, expanded liner notes by Peter Relic, newly remastered tracks and features IPR’s iconic hand-letter press printed packaging. Finally, the vinyl package will add a bonus vinyl 7” and the CD package will include a bonus CD single. The extra material comes from a variety of sources: the 1⁄2-inch tape reels from the album recording sessions, rehearsal audiotapes, and a 1994 live performance. Also included is a special remix of the title track by Adam Cooper and featuring the vocals of Catherine Cooper of Alison’s Halo.

Half String was the unified muscle of Kimber Lanning (drums), Brandon Capps (vocals/guitar), Matt Kruse (guitar), and Dave Rogers (bass/vocals). “At the time of the original release in 1996, there was this term ‘shoegaze’ used to describe British bands,” explains Capps. “Half String was the same generation as those bands, and felt a kinship, but we wanted to create our own thing. We coined the term ‘beautiful noise’ to describe what we were doing. Revisiting A Fascination With Heights now, I hear a band totally in tune with itself and what we set out to do.” IPR’s Bruce Licher says, “Releasing A Fascination With Heights on vinyl is something I always wanted to do. The fact that the music holds up wonderfully after a quarter century is all the incentive we needed to make the album one of the first releases by IPR in our newly-revived incarnation. We’ve expanded this album both musically and visually to give the fans of the band a unique experience.”

“A Fascination With Heights does such a good job of using its dream-pop influences that it tends to sound more definitive than derivative. While its very independent roots kept it from receiving much attention, it’s certainly as worthy as many higher-profile records.” -AllMusic