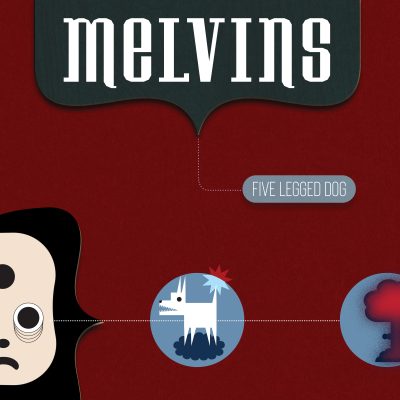 So here we are. A four-album acoustic retrospective that somehow evades nostalgia. Did you expect something predictable? This is Melvins, after all. Keep an eye out for this Five Legged Dog, this frothing mongrel, as it stalks roadside – ready to kill or maim to protect its maggot-covered bone. The set is the band’s most ambitious project yet: a 36-song, newly recorded, acoustic anthology from Ipecac Records featuring a career-spanning collection of songs from 1987’s Gluey Porch Treatments to 2017’s A Walk With Love & Death. The entire gamut of the legendary band’s catalogue is represented and despite the ‘acoustic’ designation, this is not a lighter, more pensive Melvins by any stretch. No wistful preening. These songs are delta variants, weighty, plangent, cavernous, and often brutal renditions. Not since Pete Townshend has anyone so successfully transmuted an acoustic guitar into a percussion instrument as does Buzz Osborne. His guitar strumming often gallops in tandem with Dale Crover, who, for the album’s entirety, decided to scrap traditional wooden drum sticks to compliment the album’s authentic undertones. “I used brush sticks on every track. What a pain in the ass,” he says; yet Crover nevertheless manages to blast through tunnels with those brushes. Four-string virtuoso Steven McDonald rounds out the trio with his wholly unique bass lines and an ability for vocal harmonizing that contributes to the album’s haunting atmosphere.

“I knew I wanted to do something ridiculously big,” explains Osborne of the band’s first ever acoustic offering. ”Thirty-six songs reimagined by us acoustically is certainly ridiculous, but it works. The magic of the songs is still there regardless of it being acoustic. Since we weren’t touring we had the time to do something of this size. I’m very excited about this record. Dale and Steven did a fantastic job on this. I think it’s a very special record. I can’t think of anyone else who’s done something like this.”

“The effort is still a heavy one despite the total absence of distorted guitar and bass, much like when Swans began to veer away from their pounding, metallic repetition that made them such an aural terror.” – Loudwire