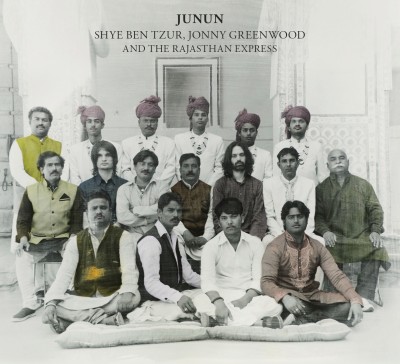 Nonesuch proudly presents Junun, an album recorded by legendary producer Nigel Godrich inside a 15th-century Mehrangarh Fort in India and featuring the unlikely combination of Radiohead‘s Jonny Greenwood, Israeli composer Shye Ben Tzur, and a group of qawwali musicians called the Rajasthan Express. Together, the collaborators have created a unique musical experience around Ben Tzur compositions that combine ecstatic, devotional Sufi qawwali musical traditions with his native Hebrew language. Filmmaker P.T. Anderson, who has previously employed Greenwood to compose the scores for the films Inherent Vice, The Master, and There Will Be Blood, traveled to India to create a documentary film of the proceedings that can be previewed with the trailer that’s available below.

Explaining his reasoning for joining the project, Greenwood recently told the Evening Standard, “When I was in the Negev desert in southern Israel a couple of years ago, I heard a band playing… a strange mix of Arabic and traditional Indian music, one that I’d never come across before. The best song, I found out, was written by Shye Ben Tzur, an Israeli musician who had been living in India until this year. I set out to discover more about him … I’m always a little wary of rock bands half-heartedly dabbling in world music—itself a slightly greasy term—but there are exceptions.”