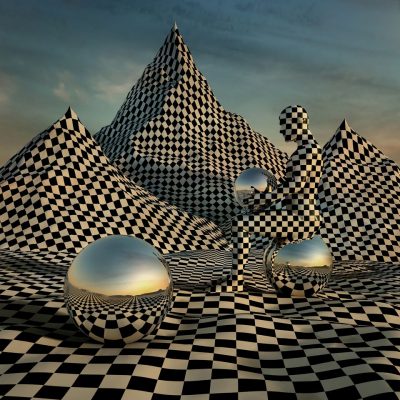 “I’ve always been all about getting lost in a record, putting on my headphones and just listening, over and over again,” says Gueorgui Linev, the masterful Bulgarian-born producer behind Kan Wakan. “If I like it, it’s a record I live in for weeks.” Linev’s highly-acclaimed debut Moving On dissolved the genre-breaking electronica of Massive Attack, Air, and Zero 7 into a bottomless sea of psychedelic soul and ambient atmosphere, and since its 2013 release he’s been busy working with artists including Arctic Monkeys and Moses Sumney, scoring the upcoming feature film Dead Draw, and meticulously compiling the tracks that now make up his sophomore album, Phantasmagoria. A surreal sonic noir, Phantasmagoria is a three-disc collection that advances Linev’s compositional expanse past the confines of his debut, offering patient listeners a delicately-constructed masterpiece that dances between the warmth of reality and the cool transience of dreams. Its three discs constitute distinct compositional movements, during which Kan Wakan simultaneously fuses, dissects, and evolves the formulas of downtempo electronica, orchestral ambience, and celestial soul.

The album is composed of collaborations between Linev and a variety of talented artists, and he says the title “embodies the subconscious path that flows through each piece of music, and their unique physics. And in these songs, each guest becomes a curator – a storyteller giving the room math to explain that ebb.” Elle Olson’s mysteriously moody croon haunts Phantasmagoria’s first LP, and Rachel Farran’s soulful delivery bookends the adventurous, varied sonic exploration of a second LP that also features Avi Buffalo, Steady Holiday, and Keenan O’Meara. SAÍGO’s upbeat energy dominates the third LP, completing an intimate journey that is richer because Linev chose to work with all of his collaborators in person rather than remotely. Linev’s personal history also emerges through his production: the lush orchestral arrangements (performed by the Sofia Philharmonic), for example, evoke Linev’s first musical memory of watching his uncle lead an orchestra through Giuseppe Verdi’s Aida when he was eight, while the celebration of musical multiculturalism and communalism throughout the album is a direct result of a youth spent collecting the bootleg cassettes that trickled to Bulgaria from around the world. The three-LP collection is vast, and it’s meant to be taken slowly. “We live in a world where everything is at your fingertips on the phone,” Linev says. So, “why bother listening to an entire record? Why even bother scrolling down?” On Phantasmagoria, Kan Wakan provides the answer by presenting a rare record that’s worth “living in” for weeks – a decidedly self-assured accomplishment of lush, nuanced artistry that channels appreciation for the music of Linev’s youth and connects it with the stories (and tremendous vocal talents) of his friends.