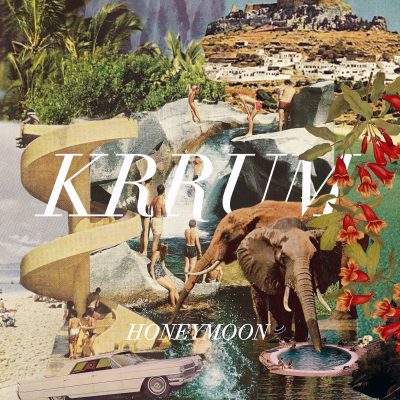 Producer and songwriter Alex Carrie hails from the wilderness of Derbyshire in the middle of England, where the buses stop at 5 pm and the nearest nightclub is a £50 cab away. His first musical port of call was punk, and when he was young he played trumpet in a ska band. Everything then came into focus at Leeds College of Music, where Carrie moved to study production. Here, he met Harrison Warke, a singer and songwriter who would join Carrie to form Krrum. They rented a house with the driest basement they could find, dumpster-dived for carpets, bought some extra synths, and constructed their very own makeshift studio. The duo first garnered attention in Britain with “Evil Twin,” a huge debut single – described as “twisted electro-soul” by Mixmag – that has generated more than 7.5 million Spotify streams.

“Evil Twin” appears on Honeymoon, Krrum’s first LP, along with “Moon,” which is equal parts ethereal and infectious and demonstrates the duo’s underlying passion for both confessional songwriters like Justin Vernon and Thom Yorke as well as beatmakers like Kanye West and Justice. Other highlights include “Waves,”  a fidgety, frantic track which Carrie claims “is about noticing the cyclical nature of everything, being scared of repeating things and having no control over it, like your life is predetermined,” and the chilled-out “Phase.”

“[Krrum] feels industrial yet also blends together art rock and pop quite perfectly.” -The Revue

“[Krrum] exists in a brightly colored world of its own. Atop… charming chaos, Krumm’s vocals are confident and smooth, with an attitude that molds the song’s unique disposition… A sound that’s somehow quirky and soulful at the same time.” -Stereogum

Digital Servicing Only. Download the single using the instructions to the right.