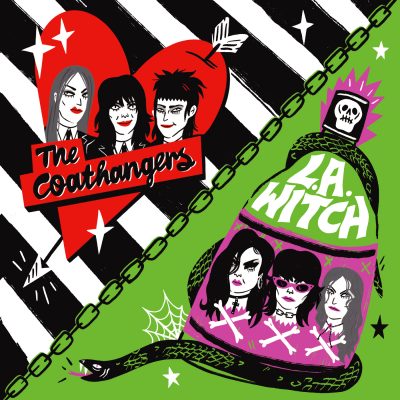 On 2020’s Play with Fire, L.A. Witch took listeners on a bold new journey while retaining the siren-song mystique, nostalgic spirit, and contemporary cool of their self-titled debut. Despite the stylistic breadth of the record, there is a unifying timbre across the album’s nine tracks, as if the trio of young musicians is bound together as a collective of old souls tapping into the sounds of their previous youth. The album took the band to new critical and commercial heights, and they’re finally able to take their new music on the road with an autumn tour supporting The Black Angels this fall.

The band also has a new single, released on a split 7″ called One Way Or The Highway with The Coathangers as the latest installment of Suicide Squeeze‘s ongoing series of split singles. For their contribution, L.A. Witch covered The Gun Club’s smoky punk blues with an exhilarating rendition of “Ghost on the Highway.” The trio’s version harnesses all of the original’s propulsive energy and rockabilly swagger while adding a seductive element to the song’s tales of ominous temptations, draping it all in an extra coating of dusty tolex reverb to bolster its vintage flavor. One Way or the Highway will be available with an vinyl pressing limited to 1,000 copies.