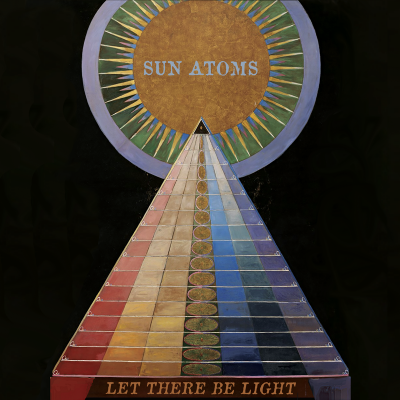 Let There Be Light by Sun Atoms is the debut solo effort from Portland, Oregon’s Jsun Atoms, produced by The Dandy Warhols’ guitar pedal maestro Peter Holmström and mixed by London’s legendary Stephen Street (Blur, The Smiths, The Cranberries). The rich pedigree is evident in this eight song LP, Let There Be Light, an incredible combination of psychedelic dark wave and postmodern pop, due in part to some first-rate guest performances Jasno Swarez of The Vandelles, The Black Angels’ Alex Maas, Gregg Williams (Sheryl Crow, Blitzen Trapper), St. Louis beat boss drummer Bob Mild, and Sacramento punks Pets. The genres bend and blend from song to song through such luminary influences as Love and Rockets, Moon Duo, The Cure, Nick Cave, Spiritualized, and Leonard Cohen. Atoms spent the pandemic year in the studio with longtime collaborator Holmström, crafting the songs and sending files back and forth between London, Brooklyn, Austin, and Sacramento.

Of Atoms’ earlier works, Monster Magnet once wrote that “the shoegazing vortex that sucks you in never lets go.” His bands The Upsidedown and Daydream Machine have been tour support for The Jesus and Mary Chain, Black Rebel Motorcycle Club, The Dandy Warhols, and Luna. My Bloody Valentine’s Colm Ó Ciosóig and Mazzy Star’s Hope Sandoval picked Atoms’ music for their Brooklyn Vegan playlist and had his band open for them on tour.  He has also performed several times at The Black Angels’ Levitation Festival, South by Southwest, and Joshua Tree’s Desert Stars Festival. Sun Atoms curated the most recent Portland Psych Fest, bringing together acts from as far away as São Paulo, Brazil to support Los Angeles headliners The Warlocks and Dead Meadow. Atoms’ music has appeared in television shows and movies including Sons of Anarchy and True Blood, and his band The Upsidedown is currently featured on the soundtrack of the award-winning arthouse movie Neolovismo.

“Dreamy and decadent in all the right places.” -The Boston Globe