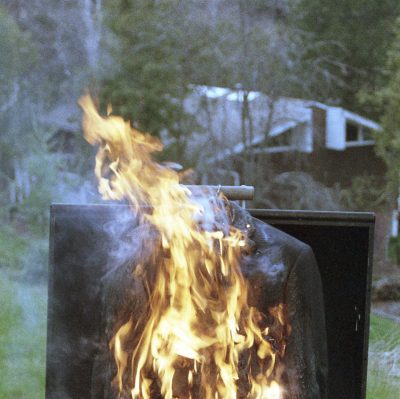 After a decade of playing in punk and hardcore bands in Southern California, Garrett La Bonte started La Bonte in 2015 to explore his impulses for work grounded in patience: slow resonances, discomfitting absences, and wayward, creeping catharses. The project is also, importantly, deeply personal. Don’t Let This Define Me, La Bonte’s debut record, frankly articulates the loneliness and isolation of love lost, but avoids confessionalism or saccharine sentiment. The songs are embodied and exacting, with a gutteral affective impact. The record is built of loss, but it bears no traces of a lack–in the songwriting’s enlivened and intelligent sensemaking, we find renewed strength in radical articulations of deep vulnerability. La Bonte feels his way to planting his feet on the ground, and we do, too. Despite life’s litany of chaoses–love’s dissolution and other furies–this record leads us (haltingly) forward.

Over two years, several friends and collaborators (Eric Shevrin of Young Jesus, Brooke Dickson of The Regrettes, Janey Riech of Layman, among others) helped bring this record to life. It was recorded, mixed, and produced by Colin Knight at Paradise Records (Fury, Death Bells, Media Jeweler).

“With an indie rock sound that hearkens back to emo, slowcore and Pedro the Lion, ‘Don’t Let This Define Me’ sees La Bonte carving out room for himself to build, then pause, breathe, and build again.” -Consequence of Sound

“A cathartic and deeply personal collection of nine amazing songs that remind me of bands like The Glands and Pinback.” -Golden State