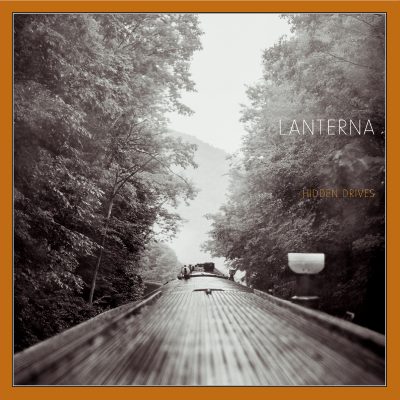 Hidden Drives is Henry Frayne‘s latest offering as Lanterna, a mostly instrumental side project begun some thirty years ago by the guitarist and member of multiple Champagne, Illinois groups including Lodestone Destiny, The Syndicate, ¡Ack-Ack!, Area, and The Moon Seven Times. In May of 1991 in an Urbana, Illinois living room studio Frayne met with The Moon Seven Times’ Brendan Gamble to record drums for what would become Lanterna’s self-titled first album. In the thirty years since then, Frayne has maintained a notebook and series of cassette tapes filled with song ideas.  And after thirty years and six Lanterna albums, the songs that constitute Hidden Drives are from ideas that might have needed a bit more time – give or take a decade – to come together.

The album was created with the help of longtime collaborators Mike Brosco, a producer and guitarist at Waterworks Audio in Champaign, as well as Chicago-based drummer Eric Gebow (Blue Man Group, Mouth Captain). For five of the songs, Frayne asked Brosco to “have some fun” and manipulate the tracks to create five additional remixes to bring the album to a total of 15 tracks. “This gives one a chance to enjoy those instrumental parts that might otherwise go unnoticed on the more upbeat songs. As a listener,” Frayne says, “I wish more bands would do this.” As with 2015’s Backyards, much of Hidden Drives was pondered and formulated by Frayne while “commuting” between Illinois, and Maine, or between the coastal regions and the interior of Maine. One particular winding stretch of backroad in Knox County, Maine called “Buttermilk Lane” sports an inordinate number of twists and turns, and hidden driveways with signs warning of “HIDDEN DRIVES.”  It only took a few summers of driving and pondering the songs that make up Hidden Drives to realize that a perfect album title was flashing by around every turn.

“Lanterna does something that’s not easy. His songs are heavily atmospheric but instead of the enclosed, immersive feel that sound often yields, his compositions gallop along pastoral back roads and across desert plains, open to the sky and gathering light like a sun-catcher.” -John Diliberto, Echoes

“Pulses with a pleasant energy and songcraft that only a multi-decade songwriting veteran could craft… Driven by a sense of wonder and energy, as opposed to technical matters.” -Punk News