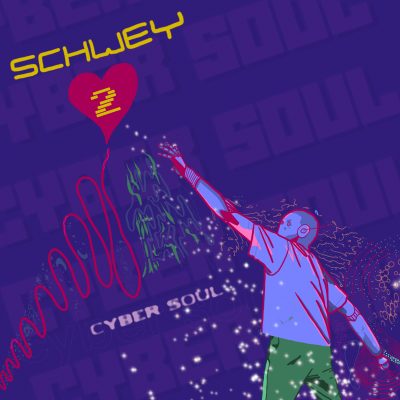 With roots in the youth DIY scene of East Vancouver, British Columbia, Schwey is known for playing engaging, energetic live shows that couples tight pop arrangements with serendipitous dance jams. In its formative years, underground DIY venues were the only option for underage people to have a good time; thus, the band crafted its soulful sound in the diverse yet unified underground scene, having to compete with the high energy of punk bands and clarity of rappers and DJs. The band made its recorded debut with a self-titled album in March of 2019, which was followed in 2020 by the Korenteen EP. Made up of Isaiah Dobbs, Jacob Schwinghammer, Jarah Dobbs, and Christopher Bedé (former members include Ben Robertson of Winona Forever and Zak Haddad, aka Hamb Sun), the genre-bending band is now releasing Schwey 2: Cyber Soul via 604 Records.

Written and recorded in British Columbia, the new album is fueled by 70s-era vibes and soulful, funk-infused riffs. It’s R&B meets pop, with old timey soul and a dash of reggae. It is also a testament to their creative output and consistent drive for a forward-facing sound. “We were hunkered down at The Garidge studio in North Vancouver hashing out synth jam after synth jam for most of the pandemic,” the band says. “It took countless demos to get to the final product and all four of us played a big part in the creative process right up until the very end. The album is a reminiscent serenade of the past set in the far future.”