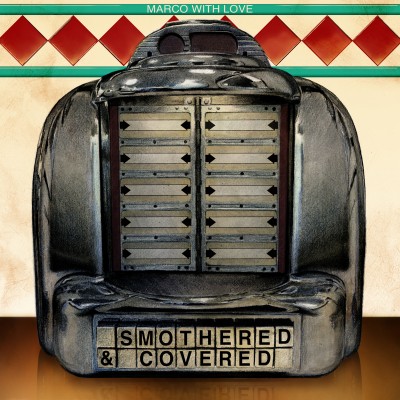 Born in 2013 as the solo project of singer/guitarist/pianist Marco Argiro (Le Mood, the Killing Floor), Marco With Love has quickly matured into a band that embodies the diversity, DIY work ethic, and true essence of rock ‘n’ roll. In addition to Argiro, Marco With Love’s agile lineup includes drummer Peter Landi (The Glazzies), bassist Subodh Samudre (Golden Bones, Peru, Planar), and pedal steel player Blaine O’Brien (Brothers NYC). Fast, rough around the edges, and slightly twangy, their sound has been compared to The Kinks and The New York Dolls and the band has commanded enough of a fanbase to open recently for artists including Courtney Barnett, Lindi Ortega, and Devo. Produced by Argiro and Anthony “Rocky” Gallo (Yeasayer, Matt and Kim, Cat Power, the XX), Smothered & Covered features six blazing hot originals next to four fresh covers culled from rock’s golden era.

On the collection, Marco With Love goes between ferocious grit and honky tonk shuffle on these swaggering, sweaty anthems that celebrate a freewheeling abandon that is epitomized lyrically in “Promised Land:” “I’m gonna live and love and learn to laugh at the sun.” The band’s original compositions highlight its ability to add creativity and a modern feel to a classic sound, as songs like “Big Black Dog,” “Tidal Wave,” and “Love” shimmer and shake with spirited vocal harmonies and rhythmic, jangling grooves. After these, the album’s second half pays tribute to the band’s influences with covers of originals by Tom Petty & the Heartbreakers, Townes Van Zandt, The Dave Clark Five, and The Doors. About the band’s love of covers, Argiro told Modern Vinyl, “It’s not that we have a lack of original songs… but every now and then it’s fun to do a cover of a song that we really cared about and we want people to hear. It’s kind of our little way of getting it out to new audiences that may or may not have discovered or knew about the artist.”

“Reverb-laced 70s folk enhancement with a passion in the vein of Deer Tick or Edward Sharpe & the Magnetic Zeroes.”
-CraveOnline

“The boys of Marco play pure, unadulterated, rock that has drawn lofty comparisons to Tom Petty, The Kinks, and The Ramones.”
-Ear to the Ground