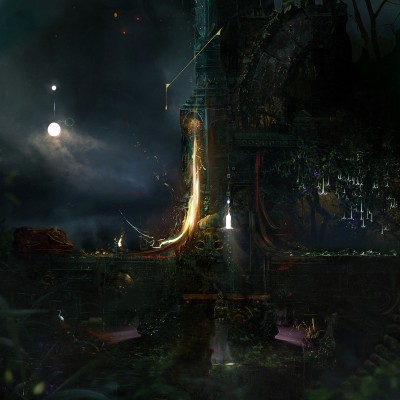 Chris Hunt is an Atlanta-based producer focused on the textural atmospheres of sound. From 2009 until 2013, he was one of the chief producers and driving forces behind Cloudeater, an eclectic and critically-acclaimed band that collaborated with Prefuse 73 and Wale and ended its run during what esteemed ATL music blog Latest Disgrace called “its most fertile period.” Following the dissolution of Cloudeater, Hunt began focusing on a new, personal, and intense sonic project. Years of writing and experimentation produced Tomb and Tomb II. The EPs (both combined for this servicing under the banner title, Tomb) were developed in a timeline marked by a tree crushing a house, grueling heartbreak and the death of Hunt’s sister, and they draw all of these experiences together in a cataclysm of sound and collapse. It was assembled using an array of traditional drums, classic synthesizers and tape machines that were filtered through layers of dense digital manipulation and analog distortions.

Opener “Dog” begins starkly, featuring pained and indecipherable vocals before exploding at the two-minute mark with the buzzy, acidic wall of noise that Hunt will explore throughout the EPs. “Plaster” and “Ultimatum” exist somewhere in a realm between songs and dreams, with Ruffin’s vocals obscured and abstracted by Hunt’s monumentally huge and cathartic production, while “Unification” provides a brief song-oriented interlude. The latter half of the servicing pushes Hunt’s layering and reconstruction techniques further in a completely solo pursuit of a distinct aesthetic that melds harsh noise and lush cinematic textures that emotive passages.

“Tomb is an ominous look at estranged noise that is unpredictable.” -Selective Memory

“Loud and bold and worth a listen… a great vessel for Marshall Ruffin’s vocals, which pair well with the exotic, badass textures weaved throughout Hunt’s production.” -Indie Shuffle