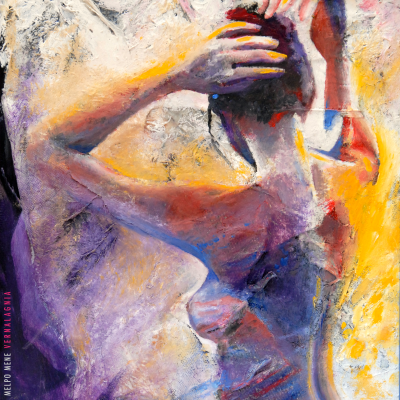 In Greek mythology, Melpomene was one of the nine Muses, or goddesses of song. When the Muses were assigned specific artistic and literary spheres, Melpomene was named Muse of Tragedy. Her name was derived from the Greek verb melpomai meaning “to celebrate with dance and song.” The Stockholm-born Melpo Mene left his native Sweden in 2013 for a move to Los Angeles. Equally repelled and fascinated by the sprawl of the city, contrasting with the cocoon of his studio, the songs on his new album are written from his strange new perspective, grappling with the role of ego in keeping us alive and entangled in this world.

Vernalagnia is his most impactful and honest body of work to date. The album, with a title that vaguely translates to “a romantic feeling brought on by spring,” arrives on Earth Day, a fitting release date as the album is not only a rebirth for Melpo Mene as an artist but a collection that muses on the tidings of life, mimicking the beauty and pain seen in nature and manifested in humans. From existential thoughts on free will to the powerful narrative of suicide prevention, Vernalagnia encompasses the gamut of human experiences. “Vernalagnia is the unscripted result of a well-meaning introvert’s musical intuition and thoughts,” says Mene. Throughout the album, his distinct and powerful voice is the star of the show. Accompanied by subtle percussion, delicate acoustic instruments and analog synthesizers, the soundscape was created with human imperfection in mind.