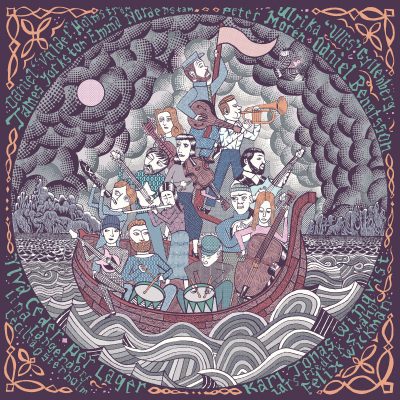 James Yorkston is a prolific writer who has worked with a wealth of talent over his two-decade career including Four Tet, Alexis Taylor, KT Tunstall, Rustin Man, Simon Raymonde, Norma and Mike Waterson, Martin Carthy, Max Cooper, David Wrench and others; and James Yorkston and The Second Hand Orchestra’s The Wide, Wide River is the result of a long-term friendship which blossomed between Yorkston and Karl-Jonas Winqvist, the Swedish music producer, leader and conductor of The Second Hand Orchestra. Yorkston’s tenth album for Domino—not counting his three albums as part of Yorkston/Thorne/Khan and two books—The Wide, Wide River was recorded and mixed in Sweden over the course of three days with a selection of musicians Winqvist brought together, including Peter Morén (Peter, Bjorn & John) and Cecilia Österholm (one of Sweden’s best-known nyckelharpa players).

The studio approach with The Second Hand Orchestra was entirely improvised around Yorkston’s songs, and the only song they heard in advance was “Ella Mary Leather;” Yorkston didn’t want to direct anyone too much, but instead allowed for a welcoming, instinctive, free-spirited and joyful atmosphere. The resulting album, The Wide, Wide River, is a soothing, warm and sublime listen, whilst also highlighting Yorkston’s skills for songwriting, collaboration and as a musical conductor.

“A career highlight after almost 20 years in the recording space.” -Aquarium Drunkard

“On The Wide, Wide River, Yorkston has filled out his worn-in, unassuming songcraft with lush, up tempo arrangements, rather successfully as it happens.” -Dusted Magazine