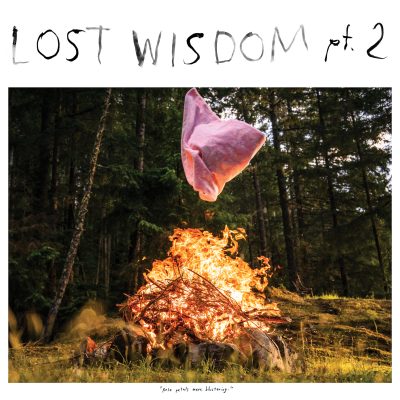 Over the past couple of decades, Phil Elverum – who initially released music as The Microphones before transitioning to the Mount Eerie moniker – has developed a cult-like following amongst listeners for his sonic adventurousness, prolific creation, wry lyricism, and relentlessly DIY ethos. Yet his last few years have been a whirlwind of change. A few years ago, he was welcoming a child into the hermetic Anacortes, Washington home he shared with his wife Geneviève Castrée. Her cancer diagnosis and subsequent death ushered in a new period of Elverum, who responded with the most unflinchingly candid albums of his career: A Crow Looked At Me and Now Only. Those heart-wrenching LPs were received not only by Elverum’s fans but by the world at large, leading to critical accolades and a weird level of mainstream attention that was magnified when it was revealed that “love returned” and he’d met and secretly married actress Michelle Williams. “With this love,” he writes, “came a new understanding of the weird balances between real life and art projects, between home and exposure. I moved into a new world and happily angled the work inward, keeping more quiet.”

“But nothing stops changing,” he continues. “It didn’t work out and I had to move again.” After the dissolution of his relationship with Williams, a new set of songs came out. Elverum writes, “I hoped to write songs about the smoldering foundation beneath all of this surface chaos, a love that doesn’t die, songs beyond mere sorrow… I tried to make songs that did not rely at all on who I am or who I am singing about… even while singing inescapably as and about myself.” In a grab for deeper continuity, he asked Eric’s Trip singer Julie Doiron – who has been an influence on Elverum since he first saw her perform in 1993  – to join him in what would become a sequel to the pair’s 2008 LP Lost Wisdom.

“Best New Track (“Love Without Possession”). A calm, clear-eyed meditation on love as a word, a mythology, and a natural event with the power to devastate and heal… Together, they tell a story that’s less narrative-based than the last two Mount Eerie albums but just as personal and profound.” -Pitchfork

“Julie Doiron entangles her voice with Elverum’s still-beating heart. This a different kind of love song, one that asks what happens after love or, maybe, how the elastic meaning of love both changes and stays the same.” -NPR