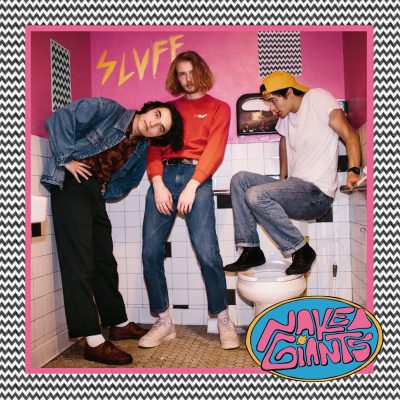 Naked Giants have signed to New West Records, and SLUFF is their debut full-length. The band – a three-piece garage rock wildebeest from Seattle – combines spontaneity with serious musicianship. Bringing together a tremendous array of influences with an audible energy that gets the crowds doing the twist, guitarist/vocalist Grant Mullen, bassist/vocalist Gianni Aiello, and drummer Henry LaVallee have built a devoted following in the Northwest, and they made this album while doing double-duty as members of Car Seat Headrest‘s expanded seven-piece band. It was produced by Steve Fisk (Nirvana, Unwound, Soundgarden) and follows 2016’s R.I.P. EP, which had songs Stereogum described as “…hulking behemoths that channel classic rock bravado into something blistering and immediate.” SLUFF swirls with hyperactive restlessness, as 1960s harmonies share space with 1970s riffs while at the same time battling an undercurrent of classic punk and modern indie influences. Of the band, Aiello offers, “From our perspective as millenials, everything is accessible all at once. There is no difference to us between punk and classic rock, or anything like that, because we’re all observing it at the same time through the same lens. Yes, history exists — but if you’re just flipping through something on the TV, it all kind of conflates.”

SLUFF is, thus, a melting pot of ideas and sounds that congeals into one cohesive whole. The riff-loaded opener, “Dead Aliens,” meshes skate punk with an urgent and tribal beat, “Everybody Thinks They Know (But They Don’t)” is a prime piece of melodic pop punk, the title track manages to capture the energy of prime-level Pixies, and tracks like “Slow Dance” and “Goldfish II” are loosely inspired by blues rock. The group’s manic virtuosity – along with its stylistic diversity – is perhaps best displayed on “TV,” a massive psych-rock epic that winds its way through all the timbres that description entails before eventually culminating in a gloriously acidic guitar freakout. Binding all of it together is the band’s spirit. Though they’ve long graduated from playing to packed house parties in front of sweaty college kids, SLUFF maintains the same raw intensity that first drew fans to Naked Giants. According to LaVallee, “I just want to make as much noise and have as much fun and get as sweaty as I can. And if that resonates with people, that’s who I want in my life. That’s who I want to play music for.”

“Naked Giants tear through scorching refrains, thunderous builds, and deep-rooted hooks with an all-natural ease. Freewheeling rock and roll with a don’t-give-a-damn attitude.” -The Line of Best Fit

“There’s a pureness to their sound, a refreshing youthful enthusiasm like they’re the first punkers to ever punk, a completely un-ironic and unabashed immersion in [the] musical tradition…” -KEXP