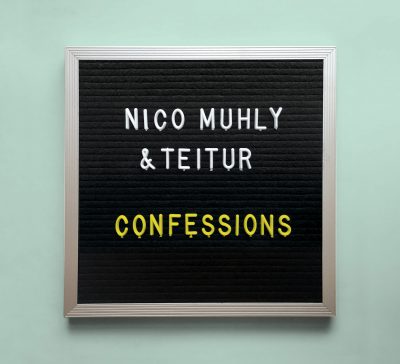 On Confessions, American composer Nico Muhly and Faroese songwriter Teitur present a collection of ornate, classically-styled music inspired sonically by the 1600s and paired with seemingly-banal lyrical artifacts from our new digital century. Recorded with the Holland Baroque Society, a group whose mission is “to convince a large and varied audience of the flexibility and vitality of (Baroque) music,” the compositions on Confessions began germinating when Muhly was composer-in-residence at Muziekgebouw Eindhoven in the Netherlands and met Teitur — a succesful pop artist in Europe who has won several Danish music awards, toured internationally, and collaborated with such artists as Seal, Corinne Bailey Rae, and French stars Emilie Simon and Nolwenn Leroy. The songs’ lyrics were inspired by or culled from video and commentary the pair found on YouTube. “We came up with this premise of boring videos, home videos… meaningless videos,” Teitur explains. “It was just fascinating when we started watching them.”