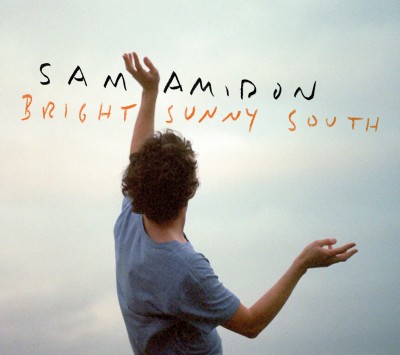 Nonesuch Records releases Sam Amidon’s label debut Bright Sunny South this Tuesday. Bright Sunny South follows 2010’s critically acclaimed I See the Sign, which earned Amidon praise from SPIN for his “quirky alchemy…contrasting pretty sounds with violent lyrical undercurrents”. Amidon describes his new collection of work as “a lonesome record” and a return to the more spare sound of his 2007 self-recorded debut, But this Chicken Proved Falsehearted. His debut was produced by Valgeir Sigurðsson (Bjork, Feist, CocoRosie) and welcomed the listener into an intimate, personal space. His new album is self-described as “a journey, a winding path. The band comes rushing in and then they disappear. It comes from more of a darker, internal space.” In the forefront, is Amidon‘s sure yet frangible voice, hovering in a high register and as its accompanied instrumentation flows just below it. The movements on Bright Sunny South are gradual because they’re contemplative, making those rare occasions of accelerated instrumentation all the more exhilarating. On “I Wish I Wish”, snare and piano chords are occasionally placed in off-beat moments, giving the song an eccentricity that separates it from traditional indie folk. Lead single “My Old Friend” is a nod to Amidon‘s American roots with “sun-warmed…acoustic guitar, capo’d high to give it a twinkling quality, edged by small cirrus clouds of electric lead”. Pitchfork premiered the track earlier this year and is featuring the album for stream here on Pitchfork Advance. Now married with English artist Beth Orton and a father of one, the Vermont-born and raised, London-based Amidon uses this record to reflect on his own history, his memories, his travels, and his discoveries. Each song offers a glimpse of early sunlight peeking over a darkened mountain; they offer a kind of respite, a sense of life’s troubles shared.