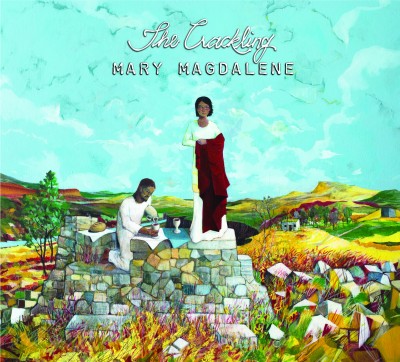 In 2011, The Crackling released their debut album, the critically acclaimed, Keep Full Ambitious. The group is now poised to release their sophomore full-length Mary Magdalene next month. Kenton Loewen‘s The Crackling brings its unmistakable darkened warmth and invitation to the sometimes bleak, often challenging, yet mostly hopeful subject matter found in their new album. Lush with texture, deep with color, and free in its unbound expression, The Crackling maintain their emotional musical vocabulary in this evocative creation. The musical diversity found in the members of The Crackling puts them in demand by several different projects, from Mother Mother to the Be Good Tanya’s and the Dan Mangan Band to name a few. In “Keep Me Drunk”, the group put on display the best example of their folk-rock sound, with the Vancouver Children’s Choir adding a celestial tone to the track’s dynamic and steady composition. Vaudevillian keys and screeching guitar add a more menacing tone on “The Crackling”. Arrangements become sparse between choruses, offering some light to the song’s dark colors. Throughout the album, The Crackling carry a dark and hopeful balance, one executed through musical and lyrical themes. “Sold the Children” offers an optimistic tone to the song’s serious matter. Guitars softly chug to layered organ and dizzying effects, showcasing howThe Crackling manages to create an interesting and innovative sound without sounding overbearing.