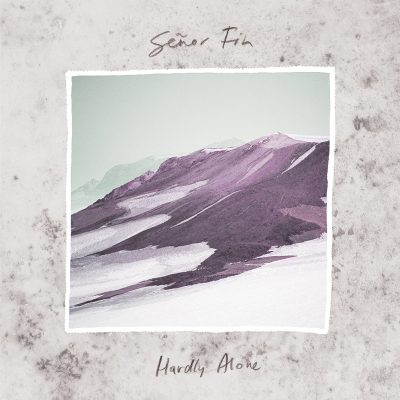 Formed in Denton, Texas, Señor Fin is a rock band that moved to Seattle in 2015. The five piece is currently composed of Jesse Miller (guitar), Jesse Botello (bass), Jon Rath (keys), Mason Lynass (drums), and Ronan Delisle (guitar), all of whom sing. Their previous releases have earned comparisons to such diverse talents as Joni Mitchell and The Dirty Projectors, and the band is noted for a self-described “genre-neutral” approach to composition that Northwest Music Scene has applauded because it “isn’t afraid to move in whatever direction it wants to at the drop of a hat.” The band’s 2017 LP Jazzy earned them acclaim in their home region, with KEXP choosing to highlight it on its list of 50 Great Pacific Northwest Albums of that year.

Hardly Alone is the group’s first album recorded with Rath, who adds some creative synth & keyboard tones. The tracks were written and polished on their tours in 2017  and 2018, and recorded by Johnny Goss (La Luz, the Fall of Troy, Lonesome Shack). Like previous Señor Fin releases, the music on the record is sonically and emotionally diverse. According to Lynass, “Our lyrics can be uplifting and grateful for one song, reflective and introspective for the next, and we strive to write music that accurately represents those feelings. One of our greatest assets is our dedication to collaboration; through the voices of two (or three, in the case of “B4 I Change”) songwriters, and the trust and openness we have with each other as bandmates and musicians, everyone in the group can communicate their intentions and share their compositional ideas to create impactful and deliberate music.”

“Reality can be weird, scary, and mundane — sometimes all at the same time. The way the band exhumes all of this into something so light and charming is a testament to their prowess as musicians and songwriters.” -KEXP

“If you have any skepticism that ‘You and Yours’ is a one-off song, just give ‘Turn the Camera’ a listen for further proof of Señor Fin’s ability to defy stereotypes.” -Central Track