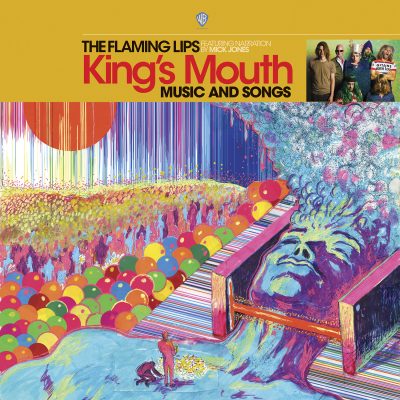 Released on Record Store Day, the first limited edition pressing of The Flaming Lips’ 15th studio album sold out instantly. Now, King’s Mouth: Music And Songs is available in wide release. The LP was produced by The Flaming Lips, Dennis Coyne, and Scott Booker with additional production by Dave Fridmann and Mike Fridmann. The Lips’ first new studio album since 2017’s Oczy Mlody, King’s Mouth features twelve new originals that create a conceptual storyline threaded together by the dulcet-toned narration from Mick Jones of The Clash. The music provides the soundtrack for Wayne Coyne’s immersive and interactive touring art installation.

Originally introduced in 2015, the art installation A King’s Mouth: An Immersive Installation has showcased its psychedelic visuals and soundscapes through North America in museums such as Meow Wolf in Santa Fe, the American Visionary Art Museum in Baltimore,  the Pacific Northwest College of Art in Portland, OR, Coyne’s own creative space, The Womb, in Oklahoma City,  Rough Trade NYC, Nashville’s Fort Houston, and at its current installed at the Arts Center of the Ozarks in Springdale, AR. Now, the record doubles as the sonic companion to the exhibit and allows fans to experience the aural side at any time. Further expanding this multi-faceted world and detailing a fascinating creation myth, the accompanying literary tome, King’s Mouth: Immerse Heap Trip Fantasy Experience tells the story of the King’s Mouth through words and visuals by Coyne and adds yet another dimension to a project that ranks among the band’s most ambitious thus far. About his vision, Coyne wrote, “The King’s Mouth immersive/child-like qualities are born from the same spark and womb as The Flaming Lips’ live performances. The King’s Mouth adventure was made for humans of all sizes, ages, cultures, and religions.”

“’King’s Mouth’ returns to the breezy, optimistic space pop that made them the band of choice. Classic Lips…the most complete Flaming Lips album in over a decade.” – Under The Radar