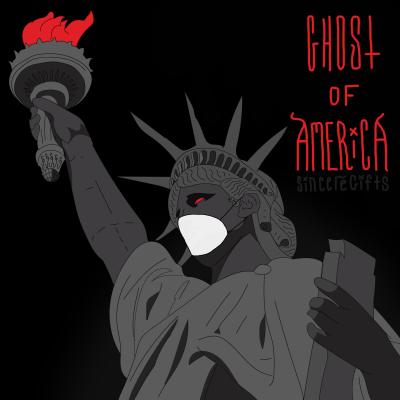 Sincere Gifts is the project of two lost musicians, New York-based animator Benben and Los Angeles-based sound installation artist Nick Byron Campbell, who found each other in the midst of America’s collapse and aim to exist outside of the normal realm of “music as commerce.” The duo has emerged from the darkness of our times as Sincere Gifts and now presents poignant debut single “Ghost of America.” A whimsical chronicle of America’s decline in a time of absent leadership and great uncertainty, “Ghost of America” combines Leave It To Beaver earnestness with an infectious vocal hook.

“The US is feeling very late-stage these days,” says co-vocalist and lead guitarist Campbell. “’Ghost of America’ is a short musical tour through the decline.” Benben, vocalist and songwriter, adds, “We intend Sincere Gifts to conjure feelings of love and magic. But we’re launching with red eyes and face masks on this musical detour to the funeral of America.” In addition to the single and video, Sincere Gifts is using using the Instagram account @sinceregiftsmusic to  a set of 45 illustrations of American icons, connected with the hashtag #GhostOfAmerica, as desaturated ghouls with glowing red eyes. A rescheduled New York gallery debut at Brooklyn’s Established Gallery will be announced as soon as the quarantine ends, and Sincere Gifts will release more new music this spring.