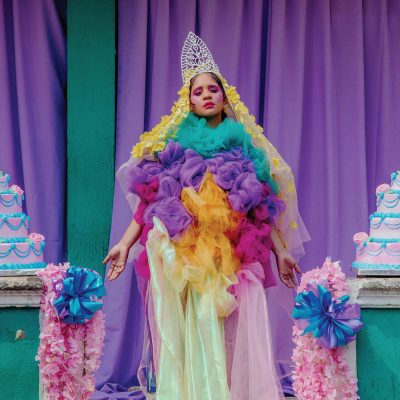 Lido Pimienta is a Colombian-born, Toronto-based interdisciplinary musician and global beats trailblazer who has been praised by NPR Music, Pitchfork, Fader, Noisey, Remezcla, Stereogum, Rolling Stone and featured on the cover of Toronto’s NOW Magazine.  She has been a speaker at Red Bull Music Academy, creates visual art and is working on a graphic novel, has shared stages with Cuco, Helado Negro and Austra, and recently performed at Hollywood Forever Cemetery’s Dia de los Muertos celebration. On April 17, 2020, she will release Miss Colombia, the anticipated follow-up to 2016’s Polaris-Prize winning LP La Papessa. Pimienta – an Afro-Indigenous, queer feminist – produced Miss Colombia in her home studio with help as a canvas for introspection, with help from Matt Smith aka Prince Nifty.  The record boasts 11 new and original songs that boldly celebrate Lido’s ecstatic musical hybridity of electronic meets cumbia, and is at once defiant and delicate, exploratory and confrontational.

The album title was partly inspired by the Miss Universe gaffe in 2015, when Steve Harvey mistakenly awarded the crown to Miss Colombia instead of Miss Philippines.  It caused Lido to reflect on the anti-blackness she’s experienced, and how she was viewed as an outsider in adolescence, a “weird artistic tomboy” for not adhering to the expected norms projected upon her. Miss Colombia was made as a canvas for introspection, with pieces about love (and self-love), and loss.  Other songs confront divisive politics in Colombia, Indigenous inequality and racism, and ultimately to bring her closer to home. Musically it digs deeply into the history of Afro-Latin musics, from Palenque to cumbia – styles that Pimienta embraced after being introduced to Sexteto Tabala, who are featured on the album.  The album also features Bomba Estereo’s Li Saumet, who guests on the powerful single “Nada.” Other highlights include “Eso Que Tu Haces,” a roaring declaration of discovery, and “No Pude,” about “the love/hate relationship” Pimienta has with Colombia.

“A new collection of splashy, spangly songs about tangled identity, queer love and the complicated relationship she’s maintained with the country of her birth.” -NPR