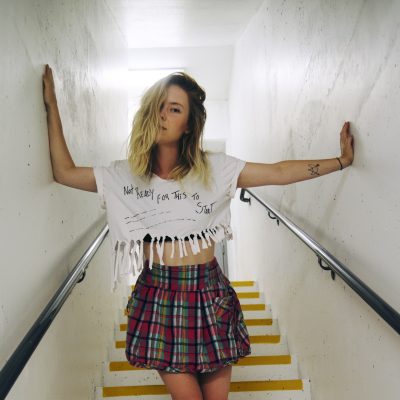 Skye Wallace is used to ambitious missions. The Vancouver artist once crisscrossed Canada by train to seek inspiration for a dark and layered album, Living Parts, chronicling the lives of characters moving through some of the more tragic tales of Canadian history. While this could’ve been the start of a path to the platonic ideal of Canadian folk music, along the way she met producer Jim Bryson (The Weakerthans) at a folk festival where they realized they really wanted to see more punk in folk music. So instead of looking to the prairies or the Pacific, Wallace turned to the likes of Sleater Kinney and Blondie for inspiration on her upcoming Something Wicked LP.

As well as serving as the opener of Something Wicked, “Not Ready For This To Start” is the first single from File Under: Music‘s One Song At A Time video series. Set to run October 4 through December 13, and starting up again January 10th, FU:M will use its YouTube channel to release new music videos every two weeks by artists from Canada, the UK, and the US. Created by Exquisite Corps (known for their work with White Lung), the video for “Not Ready For This To Start” stars Wallace as Death on roller skates targeting an extreme case of separation anxiety.

“Skye Wallace is a national treasure… [who[ has the ability to reel you in for story time, paint portraits of barren vistas and give the illusion that all things are dead.” -Sad Mag